The Ebro Delta has been a protected area since 1983 as a natural park and was considered a Biosphere Reserve in 2013. The park has several points of interest in terms of bird watching, the environment and the various ecosystems that make it up:

Illa de Buda. LAccess is restricted, although there are some days of the year with entry allowed, as it is an important nesting area to protect especially. Nearby is the Migjorn observatory which allows for good vision. It can be surrounded by boat or kayak.

Bassa de la Tancada: There is a cycle path that leads to the Encanyissada lagoon (Route of the lagoons). It has two observation towers. It is one of the best spots to see flamingos, sometimes they gather more than 10 thousand copies, a whole show. The ideal point to contemplate is the viewpoint located on the road that goes from the beach of Eucaliptus to the Trabucador.

Llacuna de L’Encanyissada. Very close to Poblenou del Delta, it is the largest lagoon in the Delta, about 900 hectares and a depth of 114 cm. It is naturally connected with the sea –with the bay of Alfacs, through the Gola Vella–, but also artificially through the drains that go from the lagoon to the bay. It is an important nesting site for birds.
In addition to the casa de Fusta, where you can see an exhibition on the fauna of the area, we also find a large traditional hut that is a point of information and agro-shop, a restaurant and an activity center. There is a 3.4 kilometre cycle path and five viewpoints.

Punta de la Banya. The other arm of the delta faces the bay of the Alfaques. It is one of the best places to see flamingos. There is a viewpoint.

On the way to Sant Carles de la Ràpita, on the left are these water springs that have created an ecosystem very different from the rest of the delta. As if from another world, the Ullals of Baltasar are a kind of exotic corner in this great plain that is the Delta. The high, wild vegetation protects these fresh water springs that come from the nearby mountains of the Montsià mountain range and the Ports. The water makes a long journey through the interior of the land and appears in this place creating a fantastic landscape formed by small lakes, surrounded by eucalyptus forests. It is reached by car by the road that links Amposta and San Carlos de la Rápita. A series of signposted paths delimited by wooden fences mark the itinerary and allow the visitor to contemplate the whole and its peculiar flora and fauna without missing anything. During the tour you can observe turtles, frogs and peculiar birds such as blackcaps and bee-eaters. The eucalyptus forests and the presence of water lilies are also distinctive of this area declared a fishing refuge and a local hunting reserve.

Punta del Fangar. There is no motorized access. This is the northern arm of the delta which has an area of 517 hectares. We found a viewpoint and the lighthouse surrounded by mirages. There is a colony of xarracs, the most important in the Peninsula. To get there you have to leave your car at the Marquesa beach and walk about 4 kilometres. It is a pleasant walk along the seashore.

Bassa del Garxal. There is a three-kilometre cycle path and five viewpoints, including the Zigurat, a large wooden construction in which a large number of birds live.

All the points of interest in the Natural Park can be visited along the routes proposed by the park itself.
There are nine in total.

Itineraries through the Ebro Delta in Catalan, Spanish, French and English 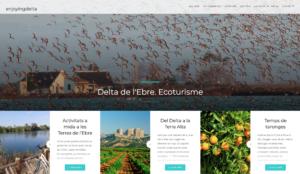